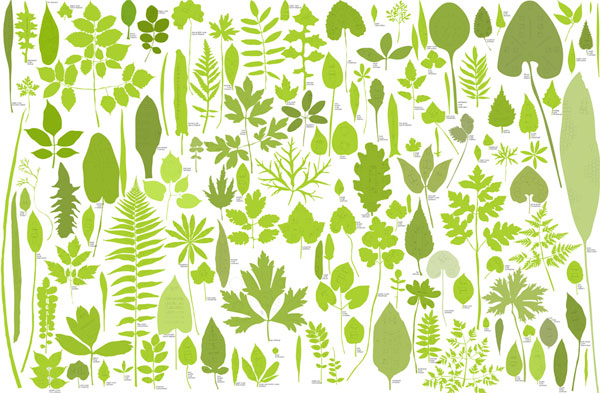 The extraordinary context of The Great Pyramid encouraged us to create a new type of city based on the concept of void metabolism. Unlike the core characteristics of the metabolist movement in the 1960s, void metabolism constantly evolves. Instead of static form and function, it allows changes of elements and structure at the same time, responding to the surrounding context. Elements are detached and linkages locally defined, facilitating flexible growth through arrangements of repetitive units. In this way, development follows the same exponential growth as the pyramid, progressively forming a linear city in a ring around the pyramid that follows the limits of the site. 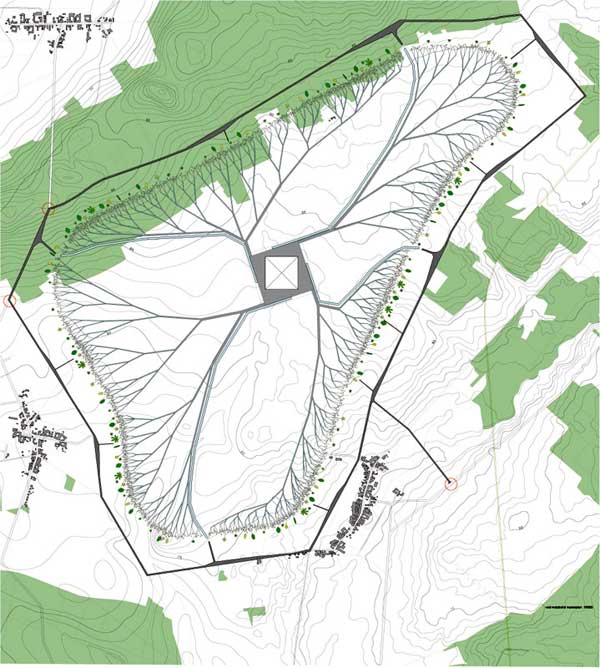 The pyramid is the epicenter of the site, around which all elements gravitate. They give context to the pyramid, embedding it in the landscape through ritual. Death is part of the cycle of life that pushes humanity and all living species to evolve constantly, and the void metabolist city is conceived in this spirit: to allow any possible evolution in the future. It suggests a strategy of implantation, which can support any possible functions and easily adapt to the growth of the project, while offering the chance for people to interact and commune with each other. Following this main idea, we propose an unlimited number of scenarios from eight elements that compose our project.

The ring is the infrastructure dedicated to the new flux generated by the pyramid. It circumnavigates the boundary of the site, connecting to the two main existing roads and distributing the linear city all along its inner periphery. The impact of the fluxes is minimized to preserve the living conditions of the local dwellers by bypassing the existing villages and following existing roads and paths as far as possible. Parking is integrated into the ring every kilometer, and there are four roads for stone delivery, each connecting to one of the four canals. Programmatic functions such as these are integrated into the ring with a consistently changing road width. 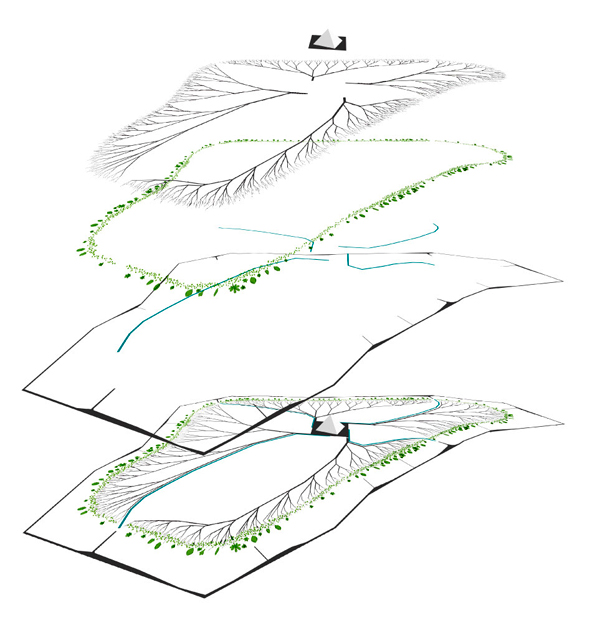 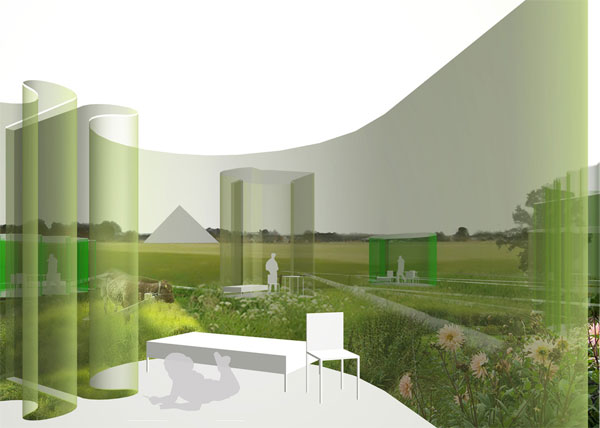 Inspired by the diversity of shapes from Herman de Vries’ work of art From Our Garden, we created a diagram of leaf-architectural typologies adapted to our programmatic intentions. There are two main types of rooms: bedrooms and facilities, each of which have the potential to be any shape.

The bedrooms are treated as ritual spaces, where a visitor spending a night on the site can meditate facing the pyramid landscape. Each room has its own individual path that eventually connects to the pyramid, forming a special connection between the guest and the monument.

The facilities connect to the promenade and serve as spaces for both everyday requirements and spiritual endeavors.

The necropolis is dedicated to the memory of the deceased, but also allows the continuation of life in a poetic and unique atmosphere. 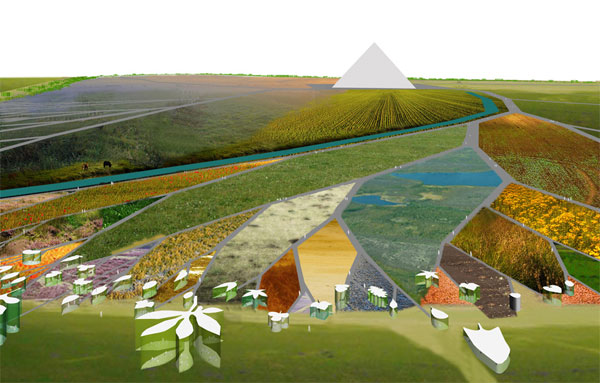 The linear city roughly follows the inside of the ring with a setback of two hundred meters, as a first transition into the pyramid territory.

Void space is the main spatial quality of the new urban space; the varying densities of detached elements spontaneously form a promenade with clusters of leaf-bedrooms oriented toward the pyramid on the inside, and with leaf-facilities oriented toward the ring on the outside.

The leaf typologies are presented as a metaphor of the volumes that compose void metabolism: in fact, they could be any shape, as the essence lies in the layout of detached elements generating a pattern of void spaces interacting freely.

Void metabolism generates a maximum fluidity of movement and also creates multiple angles of views through interstitial spaces. This permeability of space impulsively leads the visitors toward the tree paths and the pyramid.

After being deposited on the ring by truck, the stones move slowly toward the construction site by canal, as a last symbolic journey through the purifying element of water. The boat becomes the private ceremonial space where the friends and relatives of the departed can reflect, meditate, and be in contact with the stone. Four canals span across the fields from the ring to the pyramid construction platform. Existing and artificial changes in topography around the site create dramatic views both from and of the canals, allowing other visitors to observe the flow of stone in the landscape.

5. Tree-Paths from the Pyramid to the Linear City

The tree-paths take root at each corner of the pyramid’s construction platform and ramify until they reach the linear city. The width of the paths changes at each ramification, from the narrow path attached to the leaf-bedroom to the broad trunk rooted in the construction platform. We imagined a twice-daily procession fixed at sunrise and sunset, in which visitors leave the linear city on small individual paths and progressively gather as the paths get wider, finally reaching the pyramid together.

6. Void Space of Gardens and Fields

The geometry of the tree paths generates a variety of fields, from small cultivated gardens, to agricultural scale crop and flower fields, to vast plains of pastureland and untamed flora.

Produce from the fields can be used in the linear city’s restaurants, bakeries, and flower shops, creating a partially self-sufficient microcosmic ecosystem. Some fields throughout the site are regularly burned, while others are kept until they reach the state of climax vegetation; the fallow fields show different stages of the natural cycle as a continuous rebirth of life. Some fields and gardens may be used by an invited artist for a sculpture or as a site for landscape art. This textured landscape offers thousands of possible journeys through different environments, all gathering for the final approach to the pyramid. 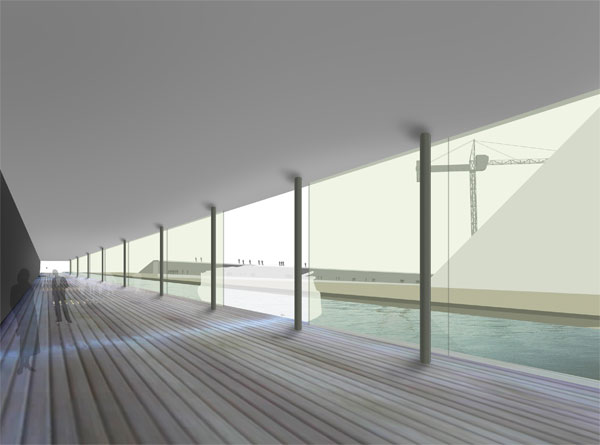 The gallery frames the pyramid, connected to the tree paths at its corners and to the canals at its sides. It faces out onto the construction platform, allowing visitors to watch the ongoing construction work;. The earth-sheltered back wall is carved with names of the deceased, creating a memorial wall that lines the gallery. The gallery also acts as a harbor for visitors accompanying the stones by boat; during the construction period, only visitors attending a stone ceremony will be able to enter the construction platform, but without the option of stepping out onto it. As the canals lay on different topographic levels, the gallery is composed of four wings: two opposite wings lie on the ground at the highest and lowest levels, and the two other wings are sloped to connect them. This situation of different levels allows a variety of viewpoints to observe the construction and to witness the stone of a beloved one being laid on the edifice. 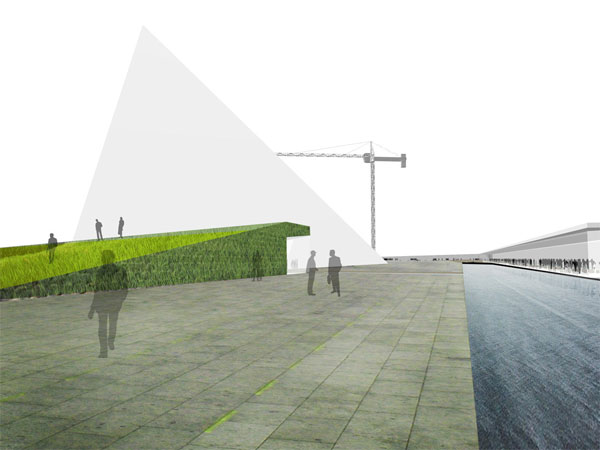 The construction platform is the surface directly surrounding the pyramid, only accessible to the workers until the completion of the monument, when the platform becomes a public plaza. During the construction, visitors can observe the placing of stones from the adjoining gallery.