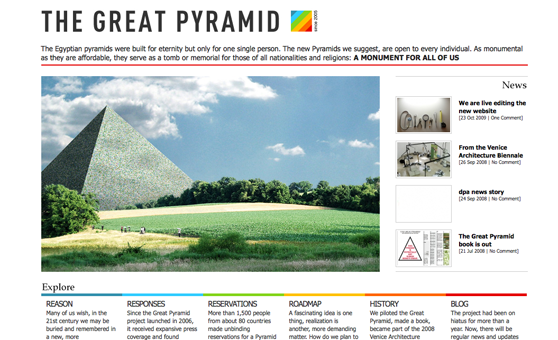 Ever since the Great Pyramid project gained international media attention people have accused me of having stolen their idea. Usually I had never heard of them before and their ideas were drastically different. But now there is a new situation. Founding member and former chairman Jens Thiel is presenting himself as the legitimate heir to our association’s work, copying and modifying the content of our website.

Already last year, a gloomy Thiel told me in front of some witnesses: “Ingo, you invented it, but I am the Pyramid.” Drunk and wearing a hood, he resembled a doomed character from a German Expressionist movie. The months that followed did indeed turn out to be horrible, as Thiel wanted the rest of our team to suffer from his personal crisis at least as much as he suffered himself. He considered this to be “just fair,” as in 2007 he had done more than anyone else to make the Great Pyramid happen. But when the project funding from the Federal Cultural Foundation of Germany was gone and Thiel’s salary ended, his enthusiasm faded. He created a decent financial mess, left our association, and hijacked the association’s original web address, thegreatpyramid.org.

It cost us some money and a lot of time to put things back in order and to move our content to the new web address www.thegreatpyramid.de earlier this year. But Thiel has not ceased to bother us now that his “nasty breakdowns” have apparently subsided. At the old association’s web address, he claimed that our website is just a “hype”. In October he launched his own “The Great Pyramid” website onto which he is copying our content, falsely asserting that it has existed “since 2006” (a couple of days later it’s „since 2005“) and that our “supporting association Friends of the Great Pyramid e.V. (…) is now defunct” while an anonymous “core part of the original team” – obviously just him – ”carries on with the project”. Thiel is far from following his own “indispensable” guideline: “Be true!”

I and the Friends of the Great Pyramid claim no copyright on the idea of the Great Pyramid. If Thiel or anyone else should be successful in making it happen, we would only be happy. But stealing content from our website and telling lies about our association is another matter. Until now, almost 1600 people have made an unbinding reservation for a Pyramid stone and we have the utmost respect their trust. We are currently developing different strategies to make the Great Pyramid actually happen. We are far from defunct.